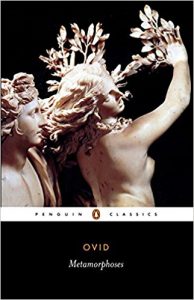 Ovid played naughty kid brother to his contemporary, Virgil, whose Aeneid  became the normative (and soberly revered) foundational text for imperial Rome. Ovid’s Metamorphoses plays a much different game, resisting the unified effect of the Homeric model to produce a patchwork of short stories in verse, no less ambitious in scope, but shot through with comedy and parody, as well as profound observation of the human (and surperhuman) world.

Ovid’s work provided a rich vein of narrative for Renaissance verse and drama,  many of whose stories you’ll know even if you’ve never read the originals. His takes on classical myth are part parody, part canny psychologising. Find out where Chaucer learned a great deal of both his wisdom and his cheeky audacity. David Raeburn’s translation for Penguin Classics is both a good read and well annotated.

This entry was posted in Uncategorized. Bookmark the permalink.