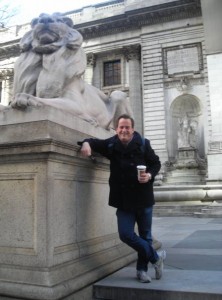 Reading between the lions at the New York Public Library, January 2009

Over thirty years, I have taught English language and literature units at universities on three continents, including

The University of Manchester

The University of Birmingham

Royal Holloway in the University of London

The University of Guelph (Ontario)

The University of Toronto

The University of Melbourne

My research specialty is Old English poetry, but I have also worked extensively with Middle English texts by Chaucer and his contemporaries and English language poetry of all periods.

Since coming to Australia in 2003, I have taught at The University of Melbourne, The Australian Catholic University, and  Monash University.  I have also given talks on poetry and ideas at the Savage Club, the Society of Women Writers in Victoria, and the Hancock Society, and I have delivered guest lectures on the history of English and the theory of knowledge at Methodist Ladies’ College and Wesley College. From 1997 to 2003 I offered courses for the public in the Centre for Continuing Education at the University of Manchester in England.

and creative writing (poetry and an unfinished novel for the desk drawer).  I’m currently finishing a book-length collection of essays on various literary, educationalist, and broader cultural themes.

I’ve also got a very slight musical past.  Here’s the evidence: 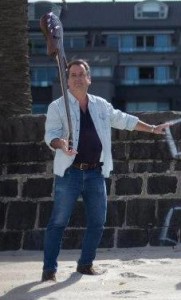 I can do this properly too. Look left.

How and Why I Teach Literature 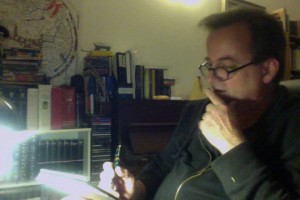 Fed up with deans? Can’t get a proper academic job? Get a pair of professor specs and make your living room a senior common room. Vintage port optional, but they might throw in a ‘Scholar at Work’ road-hazard sign if you ask nicely.

Across the three decades I have taught at various universities,
I’ve been moved and sustained by a small number of considerations, most of which
no longer carry much weight (if they ever did) in those institutional settings.

Human beings have been doing unusual things with the same words they use for everyday communication for as long as they’ve been aware of this thing we call “language.” Maybe longer.  We can only guess at what motivated the earliest users of literary language:  the makers of myth and communicators of ancient story and legend.  The building up of cultures and religions and big meanings out of those sorts of narratives had to have been a serious business in some ways, but pleasure could never have been far from the top of the list, either.  Just look at the book of Jonah, whose serious message is carried by a comic gem of story, which beautifully caricatures the sober prophetic careers of an Elijah or an Isaiah.

The very serious authorities responsible for including Jonah in the canon of Jewish and Christian scriptures can never have really got the joke.

I would suggest, tentatively (and with an awareness of many honorable exceptions), that those who take up the professional study and analysis of what we now call “literature,” commonly in the institutional setting of the modern university, often stand in a comparable plight, for far different reasons.  Chronically difficult issues of funding and administration have led those who manage university policy to emphasise research that attracts funding (no surprise here) as just about the only measure of academic success and preferment.

A piece of collateral damage in all of this has been the radical devaluation of teaching on the agendas of deans and department heads at universities around the world.  They will all insist otherwise (particularly in their publicity), but it just isn’t so.  A hiring committee, faced with making a choice between an inspired and inspiring teacher with an indifferent research record and a researcher with a strong track-record of landing research grants, will choose the latter every time, with little serious regard for any evidence of his or her teaching abilities.  They have scarcely any choice, given the material considerations they must address.

On top of these institutional issues, the last fifty or sixty years of literary scholarship in Europe and America and elsewhere have seen a succession of revolutions in what is now called “critical theory.”  Each of these revolutions has made some sort of valuable contribution to our understanding of literary texts and how they work, but as a whole their various proponents have tended to emphasize a bewildering variety of abstractions and quasi-scientific theorizings that have called the whole traditional notion of “literature” into question.  They have their reasons, but I have my own for resisting the urge to stand back and analyze literature as though it were pinned down on the anatomist’s dissection tray.

Across my own career as a literary scholar, I have found that discussing literature with students has been the best “research” I know or need to know.  All of my most satisfying insights into those texts that matter most to me have taken shape in how I’ve learned to understand and communicate their workings to less experienced readers.  The intense pleasure I take in such texts is my only reason for taking them up in the first place, and communicating that pleasure to others, as clearly and thoughtfully and engagingly as I can, the only sane and worthwhile thing I can see to do with them.

In institutional settings, the notion that literature constitutes a “subject” or a “syllabus” in which hopeful and anxious degree candidates must be assessed and sorted into statistically distributed categories of formal achievement is a very recent historical aberration.  It is a necessary evil, since those institutions must somehow demonstrate that they are making making good and proper use of the funds they are allocated by public and private bodies and offer some valid measure of student progress.  But necessary evils don’t become goods by being necessary, alas.

It is my almost constant experience—in the teaching of literature, at least—that the pressures and anxieties attendant on the most benign assessment scheme imaginable tend to narrow and choke off real, lasting learning.  The deepest engagements with any literary text arise from an expansive, relaxed and disinterested delight in the dance of sound, word and meaning they embody.  That delight, and communicating it to my students, has been my primary concern in all my dealings with those literatures, ancient to modern, I have worked with and taught.  But the current temper of university administration has made it increasingly difficult—indeed, almost impossible during the last few years—for me to find any kind of university position where I can teach what I love in the way I most love to teach it.

It is for all of these reasons—and at the urging of many of my present and former students, to whom I owe an immense debt of gratitude for their continued enthusiasm and encouragement—that I have begun offering courses to the public under the banner of The Melbourne Literature Seminars.  In a relaxed, non-institutional setting, I hope we can all share the delight, the wonder, and the sheer unadulterated fun of getting ourselves acquainted with some of the most beautiful, profound and entertaining productions of human verbal invention I have had the privilege to work (and play!) with.

That’ll do for a mission statement.  Let these our revels now begin… 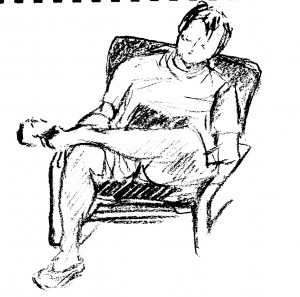 Probably snoring! A sketch of me in an all-too-characteristic pose by my son

Duties have included conducting lectures, tutorials and assessment for units in Old English

prose and poetry, Chaucer and other Middle English Literature, Medievalisms, and biblical

and classical backgrounds to English literature

included conducting lectures, tutorials and assessment for units in composition;

introduction to literature; Shakespeare; myth, epic and romance; Blake and the romantics;

occasional lecturing on a variety of first-year courses, including writing skills,

setting and marking exams for a variety of courses: first-, second- and third-year Old

English; the history of the English language; medieval and Renaissance poetry;

and lecturing, conducting seminar discussions and examining a range of courses at all

1995 – 2003    Instructor, Centre for Continuing Education, University of Manchester, where I

designed and taught wide variety of courses for the public: Old Enlgish, Chaucer,

1992 – 1995    Part-time lecturer, Department of English, Lancaster University, where I taught

courses on a range of Old and Middle English texts, among them Beowulf and other

Orfeo, the poems of  the Pearl-manuscript, and Malory’s Morte D’Arthur.

“Close to the Edge: The Fortunes of Men and the Limits of Wisdom Literature”, in

“World of Wonders: the Shaping of Reality in Maxims I”, in the Journal of the

“In the Kingdom of the Blind, the One-Eyed Man is a Seller of Garlic: Depth

Perception and the Poet’s Perspective in the Exeter Book Riddles.”  English

“The Heart of the Visionary Experience: The Order of the World and its Place in the

“Poesis and Authority: Some Traces of an Anglo-Saxon Agon in Cynewulf’s Elene.”

An Index of Theme and Image to the Homilies of the Anglo-Saxon Church.

A Reader’s Guide to Beowulf.  Book-length text and translation of Beowulf with extensive

The Fetters in the Frost: Text and Translation of Old English Wisdom Poetry with

poetry with extensive commentary for the general reader.

At the Forge of Los.  A collection of essays on various literary, educationalist and cultural